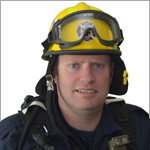 Steve joined the New Zealand Fire Service at a young age and left the department as a Station Officer in charge of a downtown city firehall. Over that 20 year career Steve attended numerous emergency incidents as well as having an active role in training. On coming to Canada Steve quickly found a role in industry providing specialised rescue skills to the oil industry. Now as a Firefighter/EMT he has obtained a number of qualifications in his career. While still involved in training he is able to bring knowledge from his Diploma in Fire & Rescue Services as well as holding a number of NFPA qualifications, his passion for training is shown in the programs developed for Fire-Med Solutions customers.